Our son is the recipient of the Bronze Star, which is awarded for heroic and/or meritorious service in a combat zone.  Aaron Davis recently retired from the Air Force, and this spring we surprised him with a tribute knife. 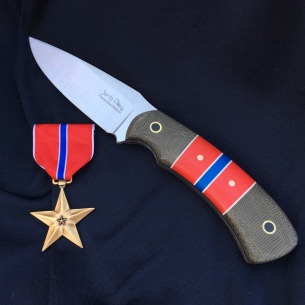 A few weeks later, my sister’s son-in-law saw Aaron’s knife on social media and decided to honor his own father, who served in the Viet Nam War, with a tribute knife. His dad is a recipient of an Air Medal, awarded for an act of heroism or meritorious achievement while participating in aerial flight.

Jerry said, “It’s my desire is to honor those who serve us and fight to defend our freedom.” He also remarked that having grown up in the sixties, he personally felt the impact of the war. Even now, whenever he views images of the Viet Nam War Memorial he is deeply moved.

Aaron also recognized a knife on Jerry’s table as potentially having an appeal to police officers, so once again we were honored to show our great respect for those who put themselves in harm’s way to preserve our lives and safety. It’s owner is retiring soon from the police force and is now enjoying his “thin blue line” tribute knife.

There’s a lot of satisfaction in crafting knives for heroes. Let us know if we can help you honor one.

I have been using one of Jerry’s hunter models for a while now and I can tell that if you get one from him you won’t be disappointed. Nice balance, great edge, and more than fair price. Always in my pack. – Jim Q.

Rhett and Hunter have the privilege of owning one of Jerry’s hand crafted knives.  We highly recommend his work. -Alicia H.